Target made $5 wine – and we had to taste it! Yes, for the greater good, we spent $20 to taste four bottles of their new wine. While nobody likes to say they drink $5 bottles of wine, nearly everybody wants to know if it’s any good. The results are interesting…

We love wine! And we love getting a great deal. But can we have both? Apparently, there are a lot of people like us and Target is trying to make us very, very happy. Introducing, Target’s exclusive new brand: California Roots Wine.

To cut to the chase – for five bucks, it’s better than nothing… 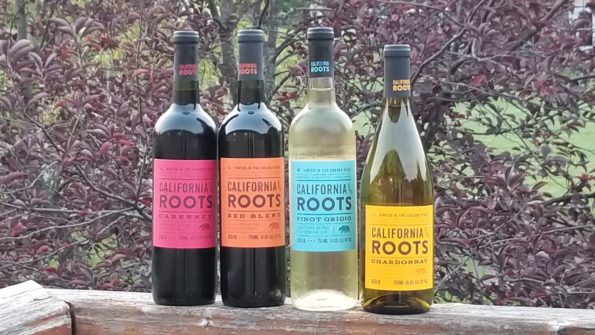 I actually called ahead to our local Target store to make sure this new California Roots wine was really there. As I walked the wine aisle in anticipation, I was initially surprised at their rather large wine selection. However, I began to notice that everything was a little more expensive than the grocery store (with much of the same selection).

But then I found it. A whole advertising end cap featuring all five bottles of California Roots wine – and a big sign touting that each bottle is only 5 bucks! As excited as I was, I only purchased four bottles because I figured Moscato is so sweet that I’m not really worried about taste testing that one yet. (Let’s find out how they do with the basics first, right?)

grading California Roots Wine – Is It Any Good?

The California Roots wine marketing team gets an “A”. The name is great, the timing is right and the branding is spot on. But is the taste any good?

Overall, while it’s kind of bland and watery – it’s not terrible – and it’s sorta of easy to drink (if you’re trying to catch a buzz). But let’s break it down by bottle because they’re all a little different. And to make it easy to compare, we’re going to hand out grades. Pencils down, this is a test.

The color is barely a tinted yellow…nearly imperceptible. The main smell is apple skin. The first taste is bland (like it’s watered down) yet a faint crisp and tartness somehow makes it okay. Unfortunately, the after taste felt flat and stale like an old soda.

The more you sip, the better it gets – much like a decent boxed wine at a picnic. So for five bucks, you could make this wine go a long way if you needed to, but you wouldn’t serve it at an intimate dinner or tell anyone you brought it to the party. Let’s keep going.

The color is medium dark and reminiscent of a young wine with mass distribution. The black cherry smell is weak and there’s a slight earthy taste. There’s not much of a finish to describe because this wine just kind of dries up in your mouth. (Nothing that I said should make you want to buy this.)

Kim recommends you go ahead and spend the $10 to get a Cabernet that you can actually enjoy, while I’d say this wine is actually over-priced, but nearly drinkable. Either way, it tastes like a lowest-shelf grocery store wine. What we experienced makes the California Roots’ Cabernet Sauvignon easily the worst of the four we tasted – which makes me want to go to Trader Joe’s and put it head to head with a “Two-Buck Chuck” cab. Another time, perhaps…

The color has more yellow than the Pinot Grigio (as it should). From the get go, I don’t love the smell because it’s possibly too acidic. But the taste is extremely mild and not too tart -making it very quaffable. The second sip comes easy and the light oak finish makes me realize nearly anybody could drink this wine.

I’m not sure I’d say it’s “good,” but for five dollars the winemaker did a very good job with this one. In fact, it’s probably a much better Chardonnay than several pricier grocery store comparisons. In fact, I would love to taste test this against “Two-Buck Chuck” Chardonnay. Is that a really cheap blind wine taste testing I smell in my future?

Not a lot of smell to this one. Not much taste either. So we aerated it and that helped bring out the red cherry. Notably, no matter how much I sipped, it neither got better, nor worse. It’s like an even keel red wine water. An interesting alcohol concoction.

Hands down, this is way better than the Cabernet Sauvignon. Here’s my two cents: if you don’t have much money and you really want to drink red wine, you can definitely get by on this Red Blend. Which means next time I’m at Target, I’ll probably pick up a bottle just to have as a back up (or for making wine slushies).

Impeccably Paired – Where Are We Tasting This Year?

Impeccably Paired Thanks You!

Impeccably Paired – About Us

“Impeccably Paired – Tasting For You.”