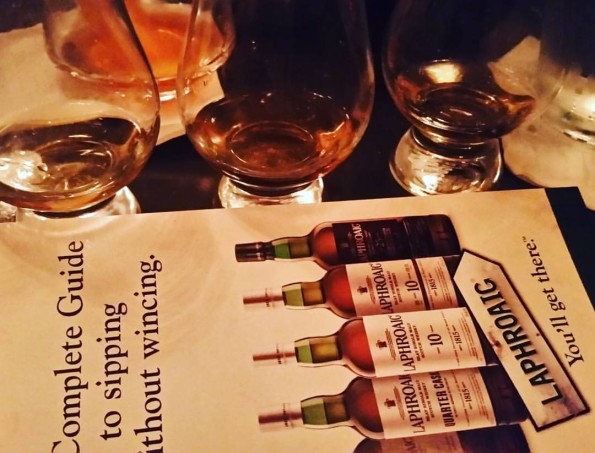 After a starter drink at the classic Julep KC bar, we were invited to take our seats at a table for two in the back room (seating for approximately twenty). At every place setting on every table were three whiskey tasting glasses and a Laphroaig (pronounced “leh-froyg”) “Complete Guide to sipping without wincing” for the Islay Single Malt Scotch Whiskey tasting in which we were about to partake. “Fasten Your Kilt,” they said; “You’ll Get There.” Hmmm…what was I in for?

Honestly, the last time I remember vividly having scotch was in high school when my friends and I were raiding our parents liquor cabinet and that was all they had (and Jay had the exact same story!) Needless to say, it is not my favorite, but Jay has had much more experience with Scotch, and he really enjoys the strong flavors and smoky taste. His favorites include Johnny Walker black, The Glenlivet, and The Balvenie DoubleWood. He also loves to smoke a good cigar, like Montecristo, Gurkha, and Rocky Patel, so he’s really into the rougher edges of a Flavor Wheel. But I knew that no matter what, we were going to have another fun and interesting evening.

“Fasten Your Kilt” – Laphroaig Is A Very Strong & Smoky Scotch!

After filling a plate with meats, cheeses and bread, they started us off with a cocktail made with Laphroaig. It tasted very medicinal to me; very strong and harsh to the palate. Even Jay thought it was “weird,” as he kept describing paint thinner! BUT, we powered through and finished our drinks. Plus, they brought out some more great hors d’oeuvres to give us a nice base for the evening. After all, we were going to be tasting a total of SIX Scotch whiskys, and Laphroaig proudly “calls itself one of the most strongly flavoured of all Scotch whiskies!”

Once the tasting began, it’s hard to describe what happened next, but according to the upper-right picture, the six we tasted we’ll refer to as: 1) “10 Year,” 2) “Special 10 Year,” 3) “Triple Wood,” 4) “Quarter Cask,” 5) “Select,” and 6) “15 Year.” The “10 Year” tasted a lot like the drink we had, but our tongues were now getting a little more accustomed to the curiously, strange taste. Kind of like a “love it / hate it” type thing – so we just keep drinking. The “Special 10 Year” was a little better, and by the time we had the “Triple Wood,” we were beginning to really enjoy the experience.

As we sipped the night away, the two kindly gentlemen hosts described how the location of the distillery is close to the water and with the significant use of a smoked formulation of the region’s native peat, and then aged in the specific oak barrel combinations of the master distiller, all of this contributed to a prescribed aging process to ultimately define the incredibly smoky and intense blend that is distinctly “Laphroaig.” And by the time we all got to the now discontinued “15 Year,” we could surely taste the best that Laphroaig had to offer. As I took another dip into my favorite, the “Triple Wood,” I couldn’t help but look up the map of the address of the distillery, and think about how crazy it is that this wild-tasting scotch whisky made it all the way from that part of the world to mine.

And I highly recommend that you make your own trip to Julep KC! You will not be disappointed. (visit Julep KC and scroll down for their menu).

Worth Noting: (according to Grammarist.com)

“Whiskey” vs. “Whisky”
The difference between whiskey and whisky is simple but important: “whisky” usually denotes Scotch whisky and Scotch-inspired liquors, and “whiskey” denotes the Irish and American liquors. The word itself (both spellings) is of Celtic origin, and modern whisky/whiskey distillation practices originated in Ireland and Scotland. But using “whiskey” to refer to Scotch “whisky” can get you in trouble in Scotland.