Join us on a journey through Kansas – to the Midwest Winefest in Wichita – plus Grace Hill Winery, Wasabi Hinkaku, Old Town Wichita, and Wichita River Walk.

So we cut out of work early on Friday, April 22, and headed West on I-70 out of Kansas City, MO. Our next stop, Midwest Winefest in Wichita, KS. We had a two-night reservation stay to look forward to at the Drury Plaza Hotel Broadview near the Wichita RiverWalk – and within walking distance of Wichita’s Historic Old Town. But before we reached our final destination, we had one special stop to make – at Grace Hill Winery. We had never been there before, nor did we know anything about their wines. We love exploring and discovering hidden gems – whether it’s for wine, beer, happy hours, or sushi. And as we drove through the remote Kansas prairie, veering right, off the interstate, near the town of Cassoday, Kansas, we hoped our investment of time, energy, hope and possibility would pay off.

As we drove on a bit further up South Grace Hill Road, that’s where we found the peace and quiet of Grace Hill Winery. The weather was absolutely perfect as we stepped out of our car and into the breezy Kansas sunshine. As we lazily made our way up to the front-door, we were lucky enough to meet Natalie. She kindly offered us each a free wine tasting of our choice from three different flights, featuring Sweet, Dry or Mixed.  I chose the Mixed flight and Jay tried the Dry. The bottles had such great artwork, and the scenery was so gorgeous that Jay had to pause for pictures for another signature Impeccably Paired montage. I talked to Natalie about our journey to Midwest Winefest while visiting, before we decided upon the purchase of a bottle of Chloe’s Cuvee. And with more souvenirs and another notch on our local winery belt, we headed Southwest for Wichita.

Finding our way to The Drury Plaza Hotel Broadview was not only easy, but it’s conveniently located literally right across the street from the Century II Performing Arts & Convention Center – and that’s where the 21st Annual Midwest Winefest: Grand Tasting & Auction was being held Saturday night from 6-9pm. Check-in at the hotel was quick, the staff was helpful and the hotel was clean and refined. And lucky for us, we had arrived just in time for their nightly “5:30 Kickback” – where all guests are entitle to three (3) free drinks and a small buffet on the Mezzanine floor until 7 o’clock. So we quickly dumped off our bags in the room and within minutes, we were sipping on cocktails and munching on side salads with pasta and meatballs. We’re gonna count that as a happy hour.

Chillin’ At The Broadview 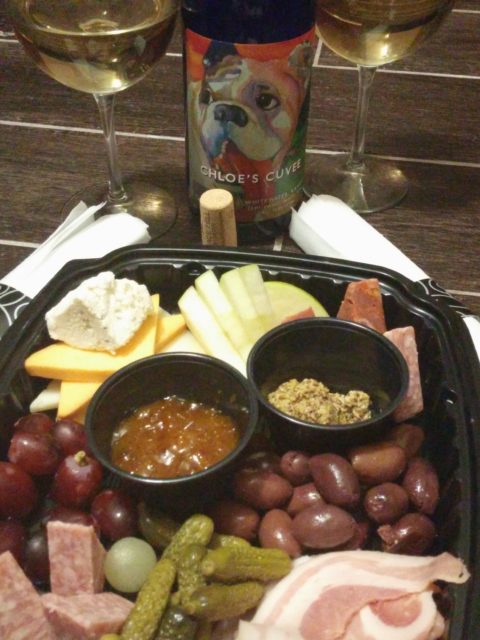 We spent the rest of the evening checking out the amenities of the hotel and relaxing in our seventh floor room. The Drury Plaza Hotel Broadview is a nice and comfortable place. It’s not extravagant, but it’s modernized (with good security), and the interior has a mixed vintage slash Victorian feel about it; while the indoor pool and the outdoor hot tub offer the comforts of home that we all hope are part of a nice getaway.  After exploring and scoping out tomorrow’s plans for a nice walk along the river the next morning, we wound up ordering a charcuterie platter from the in-house AVI Seabar and Chophouse to go with our bottle of Chole’s Cuvee that we purchased from Grace Hill. The plate was pretty good, but where were the crackers?

On the day before this trip began, April 21st,  we had learned that Prince (the legend, the musician) had died. So after we stuffed ourselves with scrambled eggs, biscuits and gravy and sausage patties at the free breakfast buffet, we found ourselves watching the second half of “Purple Rain” which allowed our bellies to settle. And maybe it’s not the place within a wine blog to talk about the death of an icon, but it’s these types of strange larger-than-life media moments that sometimes lodge deep in the recesses of a memory on a journey. And that’s how it felt, sitting in our hotel room, holding hands and watching the final scene and performance of “Purple Rain” as the on-screen Prince finally found his way. That’ll be a moment to remember, because in times like these, you realize what you have, and what you’re thankful for.

Gearing up for Midwest Winefest and watching even more T.V., we finally headed out to the Wichita River Walk – located conveniently along the west side of our hotel.  First we walked south, towards the minor league baseball park, and then made a loop back to the north, where we eventually ended up at the fork of the Big and Little Arkansas river, which has come to be known as “Keepers Plaza”. It’s a pretty awesome “Y” in the river where a native american gathering developed over the years. I tried to imagine some sort of “Dances With Wolves” moment there, but too much time seems to have passed for me to even conceive it.

We encourage anybody in the area to stop by and see it. “Keeper of the Plains Plaza,” is located just east of the Indian Center. The 44-foot steel sculpture of an Indian — whose hands are raised in supplication to the rising sun — was created in 1974 by Blackbear Bosin, a beloved American Indian artist and one of the Indian Center founders. “The Keeper” was given to the City of Wichita as a gift and has become one of its most recognizable symbols.

After a healthy walk of the body and mind, holding hands while strategizing more about Midwest Winefest, we decided we needed a good solid layer of sushi and rice in our bellies. So we found Wasabi Hinkaku located just a quick drive east of The Drury Hotel in the heart of Old Town. This Japanese sushi restaurant is located on the northwest corner of Douglas and Washington.- where we encountered a special and unique roll we had never heard or seen before: “The Coconut Gigolo” (coconut shrimp, mango, cilantro, soy paper, and peanut butter). And my guess is you looked at the words peanut butter and thought (just as we did) that that word doesn’t go with the word sushi.  Well, it was surprisingly delicious. And subtle. Think: “Thai Food.”

And on our way back to the car, Jay took a detour into the Old Town Museum gift shop, where we found some great souvenirs for our boys. And we made a mental note that the three floor museum looks pretty cool for kids. Definitely worth a tour if you budget the time. But not today – as we were then headed back to the hotel for a quick nap. Which, before we knew it, it was time for us to get ready for the main course: The Midwest Winefest!

2016 marked the 21st year for the Midwest Winefest benefiting Guadalupe Health Foundation. We only had a general idea of what to expect (and we kind of like it that way). As we left the hotel to walk across the street to the convention center, we once again made random new friends in several seasoned local Midwest Winefest veterans. And yes, the line out in front of the event looked even longer than the one at Kansas City’s “Uncorked” – although it really did move quick to get inside. (Note: NEVER use “Will Call” for events like this because those people are probably still there waiting to get in).

Most people were dressed extremely casual, and some all the way up to just below black tie. We were ushered in in a very organized way, receiving our Midwest Winefest swag bags (event brochure, wine glass, plate and advertising), and immediately I was struck with awe of what it must take to put on a charity event of this size – the sponsors, the vendors, the helpful and smiling volunteers – this was easily the largest wine event we have been to so far! And that got me excited!

There were so many booths (76 to be exact) that had either wine or spirits or appetizers or desserts (tons of desserts!) and we didn’t think we stood a chance at visiting them all in the three hours before closing. There was also a “Reserve Room” for VIP entrants, so we didn’t get see that area either. And from the get go, there was a lot of congestion, and even though our wine glasses fit nicely into our custom cut plastic plates, it was still hard to manage and navigate everything. Occasionally we could hear mishaps in the evening of people losing their wine glass to the floor.

We did find some wines we really liked, including Lincourt and Line 39, but overall, I would categorize most of the pours offered as ‘mid-level shelf’ wines. And that’s fine, but personally, I always hope my entrance fee gets me in front of some rather expensive wines that I would be otherwise too afraid to purchase on a whim. If I recall the really high end wine tasting took place in the “Reserve Room.” And that’s unfortunate – and that might be when I began comparing this event to “Dubuque Food & Wine.”

It’s true – we all make comparisons – all the time. And at Midwest Winefest, I had to make comparisons to other events. Because not only did I feel that way about the quality of wine, but also the amount of people at the event: “Too crowded!”. And we weren’t the only ones thinking it, because I heard several other attendees say it. We literally couldn’t get through half the tables because there were simply too many people. That’s why (if asked) I would say, Midwest Winefest clearly has the wine glass and plastic plate figured out; it’s quite brilliant, and easy to use. Wonderful, friendly volunteers and vendors. However, it’s hard to know where to go for what, and there were just too many people inside the event.

These opinions might sound elitist, and exclusionary – that is not intended. I truly don’t want to come off like a wine snob (or any other kind of snob!). I realize that an attendance limit can seem exclusive (and likely affect the amount of people that will bid on the auction items), but it’s almost a necessity for enjoyment for the attendee. It just feels kind of wrong to wait in a long line just to sip something mediocre. That’s just not what I’m looking for – and I don’t think I’m alone on that. BUT, it was for charity and I am all about that! And I really wish we had known about the “Vineyard Patio” where they had live music, a food truck and several brewery options. I’m assuming we didn’t know because we felt lost in the chaos of the crowds, and I don’t remember seeing any signs for it. Only when the event was over and we happened to look at a map did we see it in the brochure. Don’t you hate it when that happens?!

Midwest Winefest is for charity, and I have a feeling they were/are really able to raise a lot of money at this event. With that many people, and so many things up for auction, surely they brought in and met their fund raising goals. That is awesome! Despite the congestion, we had a great time, plus the liquor vendors near the entrance knocked it out of the park. Will we make the trip back for the event next year? Probably not. (Please don’t hate me). Will we visit Wichita again? Most definitely!

Please tell us what you think.

Impeccably Paired – Where Are We Tasting This Year?

Impeccably Paired Thanks You!

Impeccably Paired – About Us

0 comments on “Wichita Wine Tasting At Midwest Winefest”Add yours →